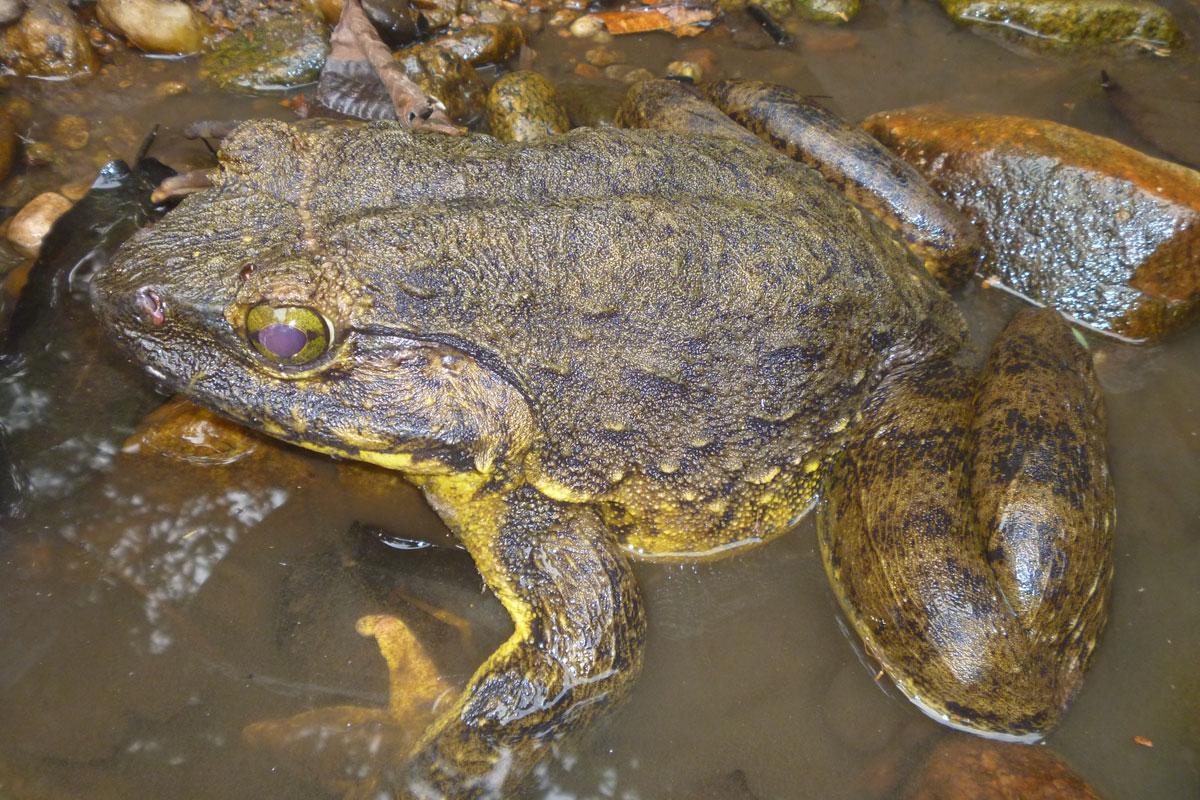 Frogs are the most threatened group of vertebrates, but at the same time new species are continuously discovered around the globe. Likewise they are arguably the animal group with the most diverse strategies for reproduction, but for most species still, close to nothing is known about their biology. A team of Cameroonian and German researchers, led by scientists from the Museum für Naturkunde Berlin, now discovered that the largest frog species of all, the Goliath Frog provides parental care, building ponds for its eggs and tadpoles.

Habitat conversion, fragmentation and alteration, diseases and the increasing presence of chemicals in the environment are threatening more than one third of all amphibian species with extinction. A further threat is the unsustainable use of amphibians, i.e. as food. This concerns as well the largest of all frogs, the Goliath Frog. In its home in Cameroon it is heavily poached as bush meat. In addition its preferred habitats, fast flowing streams in rainforests, are altered with unrivaled speed. Despite its fabulous size there was only little known about its biology, a prerequisite for any meaningful conservation action. A project initiated by the NGO Frogs & Friends and the Museum für Naturkunde Berlin, funded by various European Zoos, now led to the discovery that Goliath Frogs are not only huge, they seem to be apprehensive parents as well.

The team of Cameroonian and German researchers now report in the scientific Journal of Natural History, how they discovered that the frogs alter natural or excavates new small ponds, about 1 m in diameter and about 10 cm deep along riverbanks. Marvin Schäfer from the Museum für Naturkunde Berlin and first author of the study reports: “They sometimes move rocks weighing up to 2 kg. We think that this laborious activity may explain why adult frogs need to be giants in the first place”. The frogs lay their eggs into these ponds and guard eggs and young tadpoles. The little ponds provide the eggs and small larvae shelter from the torrential waters of the nearby river and the many predators living there. Mark-Oliver Rödel, project leader and president of Frogs & Friends adds: “Giant frogs are the first African amphibian species now known to actively prepare or even construct breeding sites for their offspring. This shows how little we know about the biology, even of some of the most spectacular creatures of our planet”.

The scientists hope that with this project and further ongoing research, they may gather the necessary knowledge to provide local authorities with the needed information for a sustainable long-term conservation of Goliath Frogs and the many species living in the same habitats.