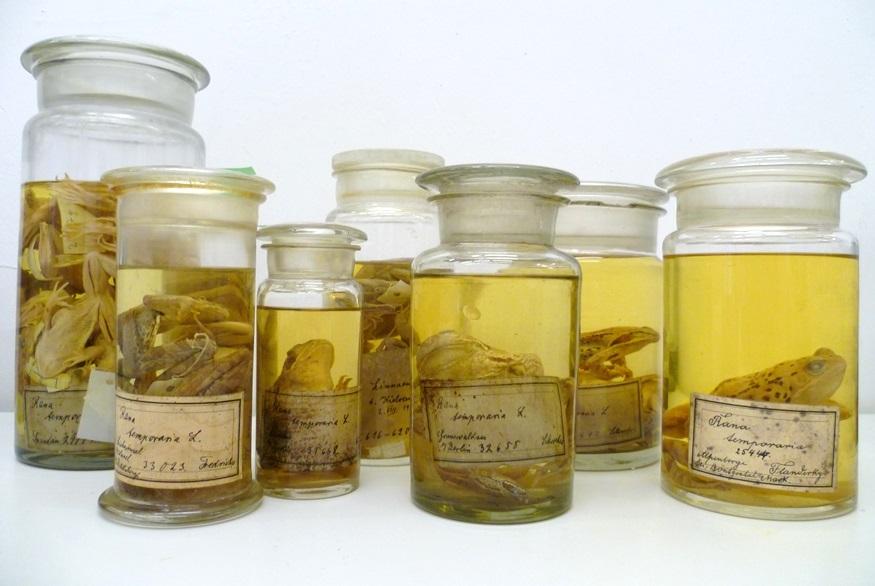 Across the world, humans are altering the environment, usually at the expense of other species. However, there are also species that successfully survive in these new ecosystems. In the journal "Global Change Biology" researchers of the Museum für Naturkunde Berlin have now published how the European Common Frog has coped with varying conditions in Berlin and Brandenburg over the last 150 years. By investigating animals from the research collection of the Museum für Naturkunde Berlin, they discovered that the common frogs seems to be doing even better in the city now than 100 years ago.

Growing cities come along with the decline and fragmentation of natural habitats, e.g. surface areas increasingly sealed and roads and railroads cutting through the landscape. Large cities even have an own climate, being islands of heat. At the same time, an increasing demand for agricultural land also leads to further reduction of near-natural habitats and contributes to increased emissions of greenhouse gases. The use of fertilizers and pesticides reduces water quality, with negative effects in particular to aquatic organisms. One group of animals that is particularly negatively affected by environmental global changes is amphibians.

Nevertheless, there are also amphibian species that survive in altered habitats. In Central Europe, this applies for instance to the European Common Frog. How species cope with changes in the long-term and whether they change themselves, is often difficult or impossible to study because of the long time periods involved. Unfortunately for the long-term conservation of biodiversity and its services, we need exactly this knowledge. Fortunately natural history collections can provide help in answering such questions. In a study published in the journal "Global Change Biology" and funded by the German Federal Ministry of Education and Research (BMBF joint project: Bridging in Biodiversity Science - BIBS, funding code: 01LC1501A-H), researchers from the Museum für Naturkunde Berlin have investigated how increasing urbanization and agricultural intensity affect the European Common Frog. To this end, they collected data on body size, fluctuating asymmetry and biochemistry of frogs, which from Berlin and Brandenburg sites, have come into the collection of the Museum für Naturkunde over the last 150 years.

The researchers assumed that the conditions for the European Common Frog, both in the city and in increasingly intensively used agricultural areas, have worsened over time. However, the results showed a completely unexpected picture. In Berlin, the frogs became comparatively larger after the Second World War than before. Thus, they seem to find better conditions for growth than in the presumably very polluted pre-war Berlin. In rural Brandenburg, however, the frogs have been and remained smaller. A similar tendency was observed in the fluctuating asymmetry, the deviation from perfect body symmetry being a sign for environmental stress. Recent frogs from Berlin had lower values and thus probably faced less stress than animals before the Second World War and from Brandenburg. The accumulation of heavy nitrogen isotopes decreased over time in Berlin and Brandenburg, but was generally higher and less variable in locations with agricultural use. The authors explain this with the use of fertilizers and a lower heterogeneity of habitats in the agricultural landscape. Taken together, the results suggest that the habitat conditions for European Common Frogs in Berlin have actually improved, despite increasing development and densification of the road network.

"We were initially very surprised that the increasing urbanization of Berlin did not have a negative effect on the Common Frog," explains the first author of the study, Stephanie Niemeier. The detailed analysis of the data solved the mystery. Responsible for the good performance of the Berlin Common Frogs in recent times are the urban green spaces, such as parks, cemeteries and allotments. The higher the proportion of green spaces, the larger the frogs were and the lower the values of fluctuating asymmetry and heavy nitrogen isotopes. The study thus shows in an exemplary way that increasing urbanization need not necessarily and exclusively be accompanied by a deterioration of conditions for urban species. Areas with intensive agriculture, on the other hand, only offer habitats of lower quality. As the principal investigator of the study, Mark-Oliver Rödel, also notes, this work also shows how "important scientific collections are as 'contemporary witnesses' of change; such collections and the information they contain do cover periods of time that far outlive the lifespan of individual researchers!”

Picture for free in conclusion with the press release: