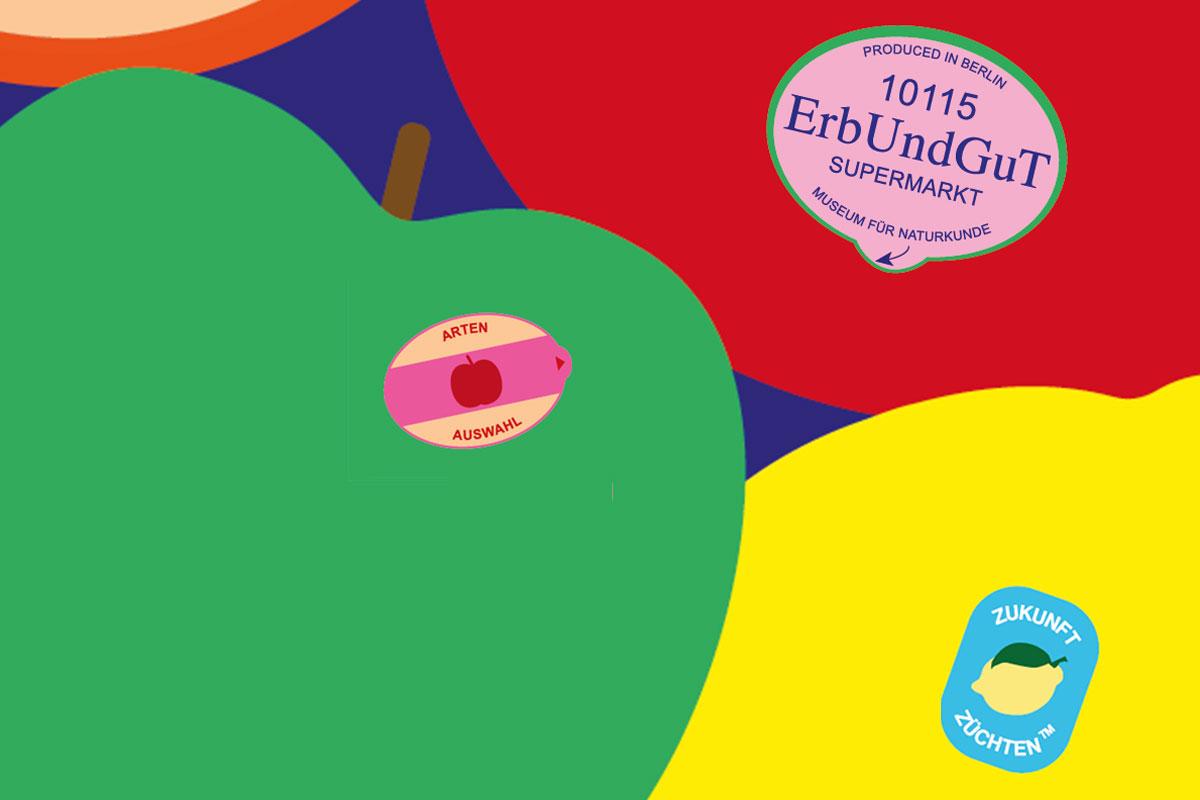 ErbundGut - The supermarket in the Museum für Naturkunde

As part of the Project GenomELECTION  we will find in our supermarkets in the future, we decide today with our shopping baskets: how we fill them with is our decision and ultimately influences the choice of products. But how do we navigate through the supermarket in our daily foray? Which role do the ways in which fruits and vegetables are produced play? The supermarket "ErbUndGut" in the Museum für Naturkunde allows a glimpse behind the facades of breeding procedures.

Today's crops are the result of a long breeding process. This entails the selection and controlled reproduction of two species with certain desired characteristics, such as a sweet taste. The aim is to reinforce such traits and suppress undesirable ones. However, many original traits such as resistance to drought or disease can be lost through breeding and regained only through decades of backcrossing with the wild plant - if at all.

Breeding always aims at a change of the genetic material. This can be done "conventionally" by crossing species or varieties, or by irradiation. Recently, genome editing technologies such as, most popularly, CRISPR/Cas 9 have hit the headlines. With these new methods, breeding is supposed to be much more precise, fast and cheap.

What sounds like one of many scientific exaggerated promises is not only a question with important consequences for laboratories. Ever new breeding methods pose not only scientific, but also legal challenges: How, for example, should the mushroom produced with CRISPR/Cas9 be labelled? It is not least because of such questions that the consequences of new scientific technologies affect us all. As in this case: during our visit to the supermarket.

Many stories could be told on the subject of breeding. We want to explore various aspects of breeding by looking at five different foods as well as the model organism of genetics, the thale cress (Arabidopsis). Let's explore the history of breeding. Let's learn more about the diversity of varieties and breeding methods. Find out more about the depth of the process or the labelling of the things we encounter in the supermarket.

We invite you to combine old and new breeding methods with everyday shopping experiences. Let us take a look behind the facades of the products so that we can continue to fill our shopping baskets with confidence in the future.

Visit the supermarket in the Experimental Field! The supermarket "ErbUndGut" is open for you daily (except mondays) from 2 to 6 pm. We are looking forward to your visit!

Get a first impression of our supermarket here and find further information on the exciting subject of plant breeding.

Our selection of products:

Various listening stations are part of the supermarket. The works of the artists Kathrin Hunze, Alberto de Campo and Thomas Hermann were created in cooperation with Deutschlandfunk Kultur and the projects PLANT 2030 and ELSA-GEA. 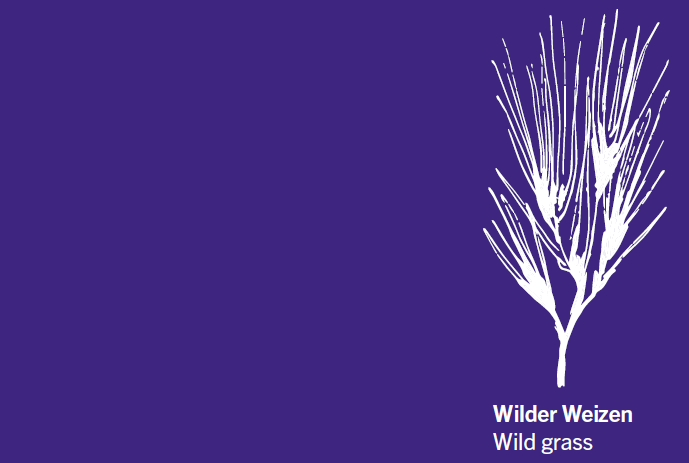 In the supermarket we encounter wheat in many different forms: as flour, noodles or semolina. What we take for granted, however, is the result of an intricate breeding history because wheat has a very complicated genetic make-up: people have two sets of chromosomes. Soft or bread wheat has a sixfold set of chromosomes. Each gene is therefore present six times in each cell, mostly in different variants. This poses a challenge for breeding.

Wheat has been cultivated for around 10,000 years and is one of the oldest cultivated grains. Today, it is one of the most important crops for human consumption and cultivated worldwide. Over the years, wheat breeding has been increasingly adapted to human needs. The original cereals Einkorn and Emmer have been developed into highly productive wheat species.

The breeding goals have changed over time. Wheat has been bred so that its grains stay longer on the plant and don’t fall off on the field. Its stalks have become shorter so as to produce less straw and higher stability.

One of today's major challenges is the prevention of mildew. Powdery mildew is one of the most dangerous diseases in wheat and can cause high crop failures. It is caused by a fungus that hibernates on crop residues and occurs especially in spring when the weather is warm and humid.

Find out more about mildew.
Click here to listen to the opinion of a wheat breeder. 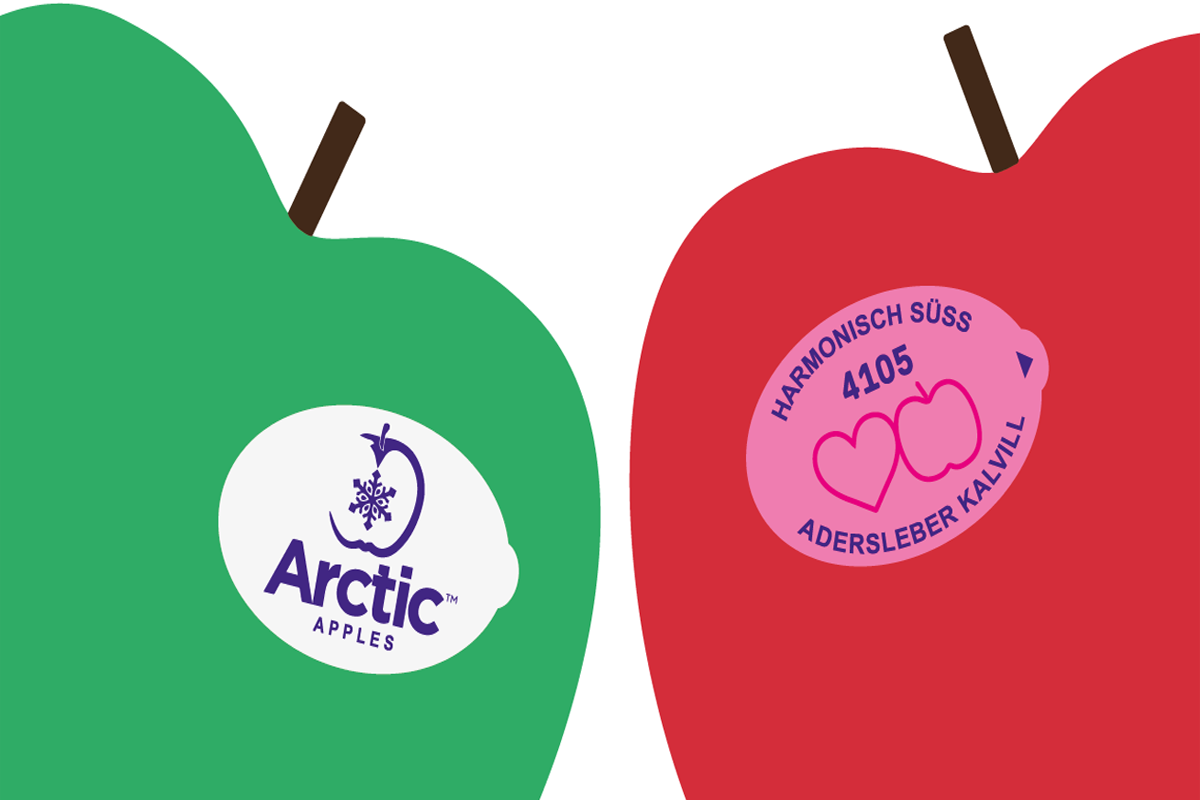 Apples are not only tasty and healthy; they are also charged with symbolic meaning. Apples are the most popular fruit in Germany. Sophisticated breeding is needed to make them look fresh and crispy in the supermarket. Common apple varieties are very sensitive to diseases, frost and drought which is one of the reasons why apple breeding is a real challenge. Another is the fact that trees grow very slowly. Let’s take a look at different breeding methods and ask if and how genome editing plays a role in it.

The most common table apples in German supermarkets are Elstar, Gala, Jonagold, Braeburn and Pinova. They are transportable and long-lasting. However, they are affected by diseases such as fungal scabs. Accordingly, their cultivation is associated with the use of pesticides, and fungicides in particular. The higher susceptibility of these table apples to diseases, drought or frost is due to the fact that they have been produced from crosses of only varieties.

Most apple varieties are the result of crossbreeding. The Arctik apple for example, which is not permitted in Germany, does not turn brown after being cut, because other genes were transferred into its genome by transgenesis. In contrast to transgenesis, where genes of other species are inserted into an organism, genes of the same species are transferred during cisgenesis. In plant breeding, these are often genes from wild forms that show a higher resistance to drought or pests. Both methods require genetic engineering. Does it make a difference to our attitude towards apples whether genes of the same species or of a different species were inserted? 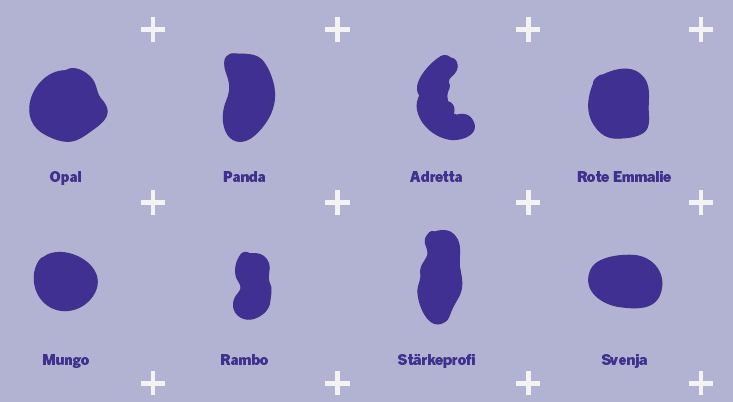 However, potatoes do not always end up in the cooking pots. Rather, potatoes can be divided into table potatoes and industrial potatoes. Industrial potatoes are used to produce pharmaceuticals, starch, alcohol or paper. Potatoes take on tasks that we would not have expected them to do: Did you know that they are used in industry and trade as a solvent-free, water-based adhesive?

The history of potatoes in Europe goes back a long way: even if there is no menu without them today, potatoes did not come to Europe from South America until the 16th century.

The potato plant was adapted to the short days of its equatorial origins, and the plant bloomed accordingly. The development of today’s potatos took some time and multiple crosses of potato varieties adapted to short days and long days. Today, potato varieties are divided into four ripening groups, which indicate when they can be harvested in the year: first early, second early, maincrop and late maincrop, depending on the growing season, which can range from 90 to 160 days.

Find out more about potato breeding. 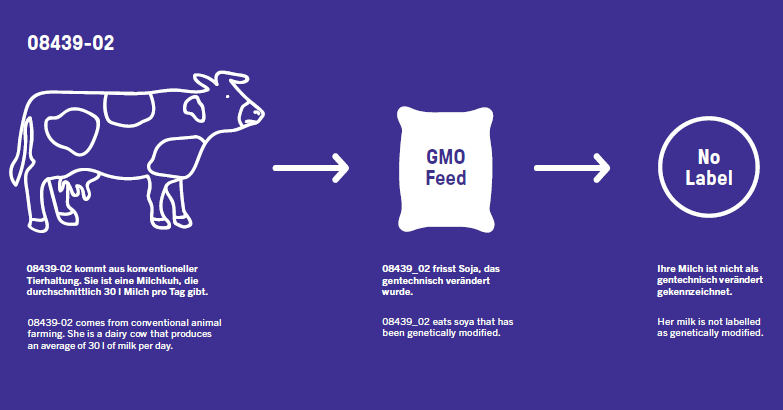 Let's move from the fruit and vegetable section to the chilled goods. On the packs of milk we do not only find information about the milk’s fat content, but quite often also idyllic images of cows. These cows form an unexpected bridge to the topic of breeding and breeding methods, namely because they need a lot of energy for milk production.

For this they receive energy-rich concentrated feeds consisting of wheat, soya, maize and similar starchy foods. Most soy is imported, usually genetically modified and labelled as such. However, GM labelling is not mandatory for animal products derived from animals fed with GMOs (e.g. meat, milk, eggs). The genetically modified feed can in some cases still be detected in the cow dung, but not in the milk itself. Genetically modified organisms (GMOs) must be labelled in the same way as food and feed products consisting of, containing or produced from GMOs.

Companies must demonstrate that they have taken appropriate steps to avoid the presence of GMO contamination. The same applies to the handling of feeds. The relevant information must appear on the product.

In addition to the labelling obligation, various labels and seals voluntarily provide information about the production process.

Does our buying decision depend on what the cow whose milk we intend to drink has eaten? Which promises are we willing to believe and what do we think they entail? 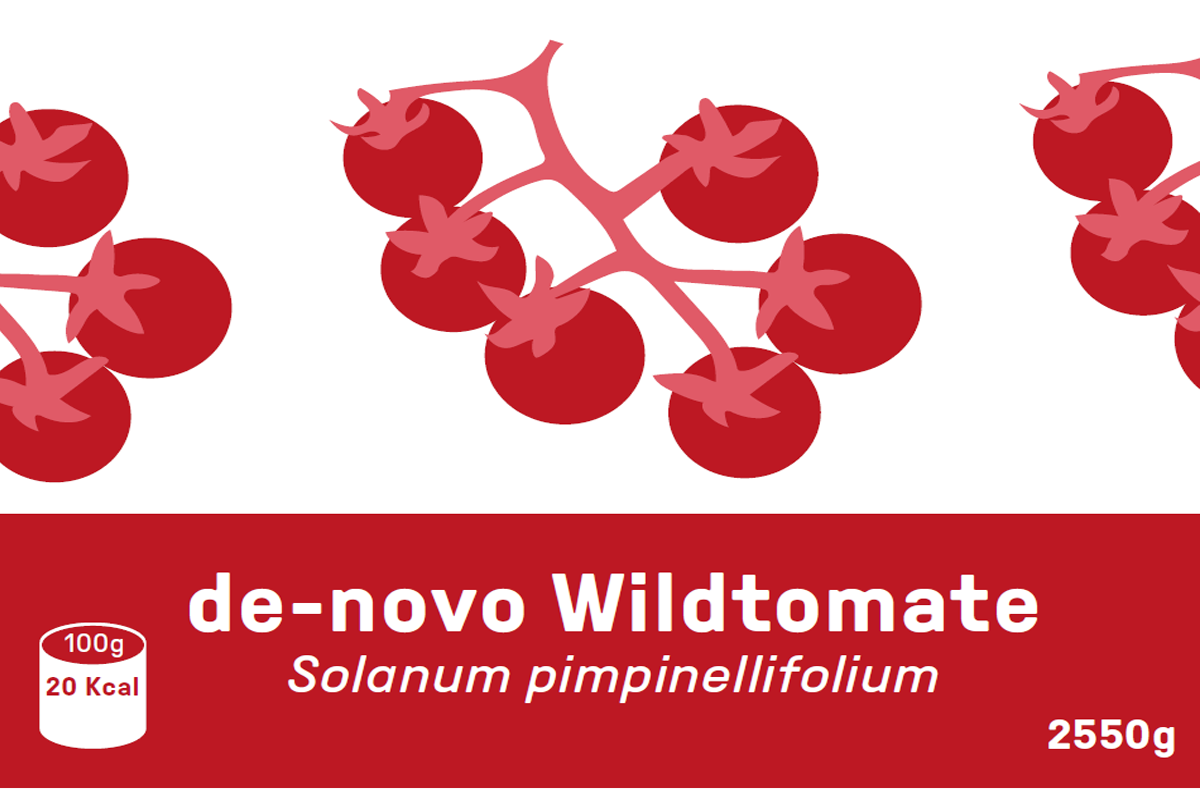 In 2015/2016, the per capita consumption of tomatoes in Germany amounted to 27.2 kg. There is no doubt: tomatoes are very popular and an essential part of our kitchens. Humans have adapted it to their needs and continually developed new technologies for this purpose. This adaptation has made today’s efficient cultivation of tomatoes possible in the first place. The tomato has changed during the breeding of bigger fruits and many of its characteristics, such as its fruity aroma, have been lost. Can this be changed?

During the copying process from one generation to the next mistakes can occur in the genome of an organism. These mutations can affect single letters or larger sections of the genome and are one important factor for evolution.
During mutagenesis the number of mutations in the genome of a plant is artificially increased. Mutations can be produced in the laboratory by chemicals or radioactive radiation. In the mid-1950s, so-called "atomic gardens" flourished, in which plants were exposed to increased radiation to produce mutations.

Since the early 1990s, genetic engineering allows for the artificial transfer of genetic material between two organisms. In “classic” genetic engineering, a gene is introduced into the genome of a crop. New genome editing technologies allow for targeted changes to individual letters of the genome. The genome can be cut at a certain position and genes can be "switched off" in this way. Genome editing produces mutations in the genome that are indistinguishable from random mutations. The advantage, however, is that genome editing, unlike random mutagenesis, allows choosing the precise location of a mutation. Thus, these methods are supposed to be more precise than their predecessors. Off-target effects are undesirable changes in untargeted areas of the genome.

You want to know more about tomato breeding? 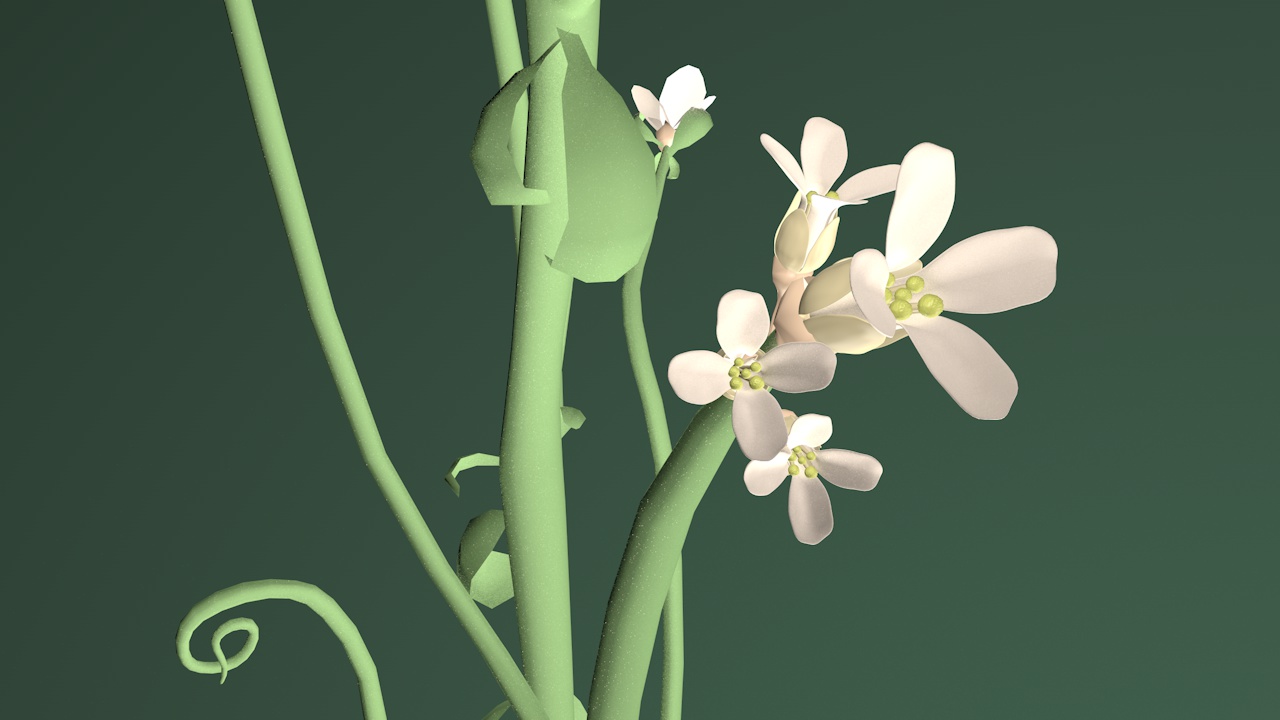 Arabidopsis thaliana, also called thale cress, is an important plant for biologists. This has to do with the fact that the genome of this rather inconspicuous plant has been very well researched and is therefore a popular model for genetic studies. Compared to other organisms, its genome is relatively short. Nevertheless, if every letter of this simple genome were assigned a sound, it would take 195 days to listen to it. By comparison, it takes about 14 years to listen to the human genome at the same speed.

Listen to it for yourself here.

Further events within the scope of the installation

Stay true to us: You are cordially invited to our supermarket events:

Performance and discussion: Into the potato, out of the potato
The performance of the artists Alberto de Campo and Kathrin Hunze translates the development of the potato into music. Be surprised and "listen" to completely different perspectives on this popular tuber. We would like to get in touch with you and illuminate modern plant breeding from an artistic perspective.
Registration here!

Student workshop: We roam the supermarket shelves together with students and take a closer look at other foods.

Panel discussion "Have our foods ever been natural?"
In July 2018, the European Court of Justice ruled that the new genome editing technologies must be classified as genetic engineering. What consequences does this ruling have for consumers? And what is the relationship between the notion of "naturalness" and this? Registration here!

Workshop: "Supermarket of the Future - Your Voice in the Refrigerated Shelf"
Together with you we deal with the food of the future.
Participation is free of charge.
Workshop leader: Susann Klemcke, Lina Figueiredo, Jantje Meinzer, YOUSE GmbH.
Registration under: info@youse.de or Tel. 030-20179800