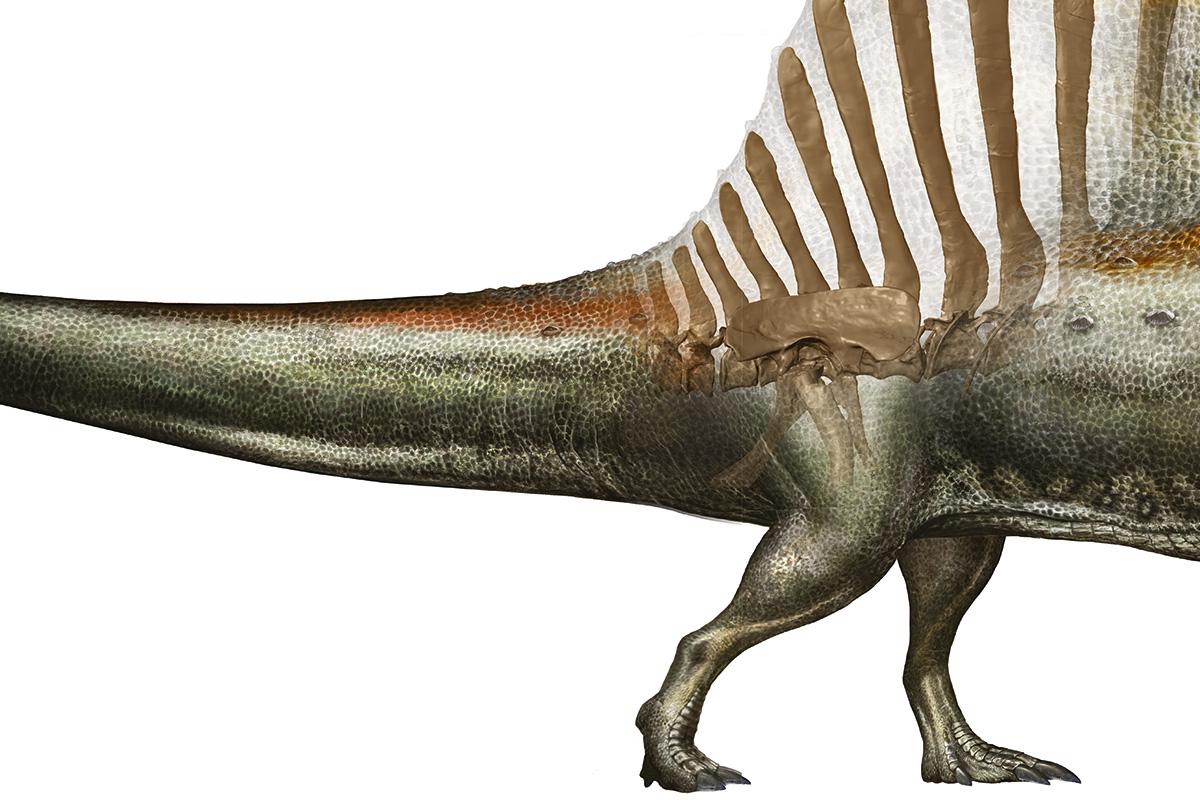 In its special exhibition Spinosaurus, the Museum für Naturkunde Berlin displays the first scientifically accurate and full-size skeleton ever assembled of this gigantic, approximately 100-million-year-old predatory dinosaur from the Cretaceous period. Was it really bigger than Tristan, the Tyrannosaurus rex that went on display recently? Why did it have a giant sail? What did the Sahara look like when Spinosaurus roamed this part of the world? With spectacular original fossils, true-to-life reconstructions and fascinating stories relating to the recent Spinosaurus find in the Sahara, the exhibition creates the picture of an ecosystem long past – when the desert was home to a unique river system. The touring exhibition was developed by the National Geographic Society in cooperation with the University of Chicago and is complemented in Berlin with historic objects and fossils from the current research programme at the Museum für Naturkunde.

All over the world, scientists study the past of our planet in order to draw conclusions for the present and the future. “Knowledge of the past is an important foundation when it comes to answering some of the most urgent questions of our time: How can we respond to the challenges of progressing climate change, the loss of species and biodiversity and the destruction of the environment in order to secure the future of our planet?” says director-general Johannes Vogel. Now more than ever, the exchange of scientists regarding their discoveries, opinions and scientific insights are key to the research process. Palaeontological expeditions by pioneering explorers such as Ernst Stromer and Werner Janensch brought countless dinosaur fossils to Germany, among them the impressive dinosaur skeletons in the atrium of the Museum für Naturkunde Berlin, including that of Brachiosaurus brancai, the current holder of the Guinness World Record for “world’s tallest mounted dinosaur skeleton.”

In 1910, German palaeontologist Ernst Stromer went on an expedition into the Egyptian desert where he found fossil remains of turtles, crocodile-like reptiles and dinosaur bones that were approximately 100 million years old. Among them was the partial skeleton of a very strange-looking dinosaur – a predator like no other. Its long jaw was studded with conical teeth and a bony sail nearly 6-feet tall stood over its backbone. Back in Munich, Stromer gave the species its scientific name, Spinosaurus aegyptiacus, Egyptian spine lizard. This unique specimen was destroyed in World War II in an air raid over Munich along with many other important fossil finds. It was not until 2008 and 2009 that more bones of a Spinosaurus resurfaced – in Morocco’s Sahara as well as at a museum collection in Italy. A breathtaking search for the dig site began, taking an international research team, including Berlin-born palaeontologist Nizar Ibrahim, to Morocco’s remote Kem Kem region, a long escarpment preserving a wide range of fossil creatures and the geological evidence for a huge river system. Excavations on location yielded hundreds of additional bone pieces and teeth of the Spinosaurus skeleton. Using these new finds and Stromer’s detailed notes, the team was able - for the very first time - to produce a complete digital model of Spinosaurus and gain insights into this unusual predator’s mode of life: The creature must have been semi-aquatic, preying on the large and abundant fish in this unusual river system.

Scientific collections as well as systematic excavation campaigns help researchers reconstruct ancient ecosystems like the one Spinosaurus inhabited in the Sahara. At the Museum für Naturkunde Berlin, palaeontologist Johannes Müller is working with colleagues from Canada, Germany and Sudan on a better understanding of the Cretaceous world of northern Africa. During their digs in Sudan, the scientists found a wide range of fossils from the Cretaceous period – skulls and partial skeletons of hitherto unknown crocodile ancestors and a plethora of remains of plants and small animals such as salamanders, frogs and snakes as well as fossilized bones and vertebrae of dinosaurs. Like the Kem Kem region and the Egyptian desert where Stromer found the first Spinosaurus, the Sudanese Sahara was part of a contiguous river system in Africa.

Some of these fascinating new fossil finds that are currently studied at the Museum für Naturkunde will go on display for the first time – together with the Museum’s valuable collection of items, including the only remaining cast of the braincase of Ernst Stromers Carcharodontosaurus. These important items from Berlin enrich the touring collection from the United States.

Ernst Stromer and his excavations in Egypt, Nizar Ibrahim’s search for the “river of giants” in Morocco and Johannes Müller’s work in Sudan: These scientists all contribute to a clearer picture of living conditions during the Cretaceous in northern Africa while also providing important insights that will help us better understand how ecosystems change over time.

This download link will give you access to photos and texts that you will be permitted to use free of charge in connection with reporting on this press release: http://download.naturkundemuseum-berlin.de/presse/Spinosaurus

Please note that the image rights for the photographs are granted to the press free of charge, exclusively and as a one-off for publication in the context of reporting on Spinosaurus (9th February – 12th of June 2016). Any other use – including commercial use - of the images is not permitted. We would ask you for an accurate quote in relation to the exhibition (©), and we would greatly appreciate a free-of-charge sample copy of the publication for both the Museum für Naturkunde Berlin and the proprietor of the image rights.