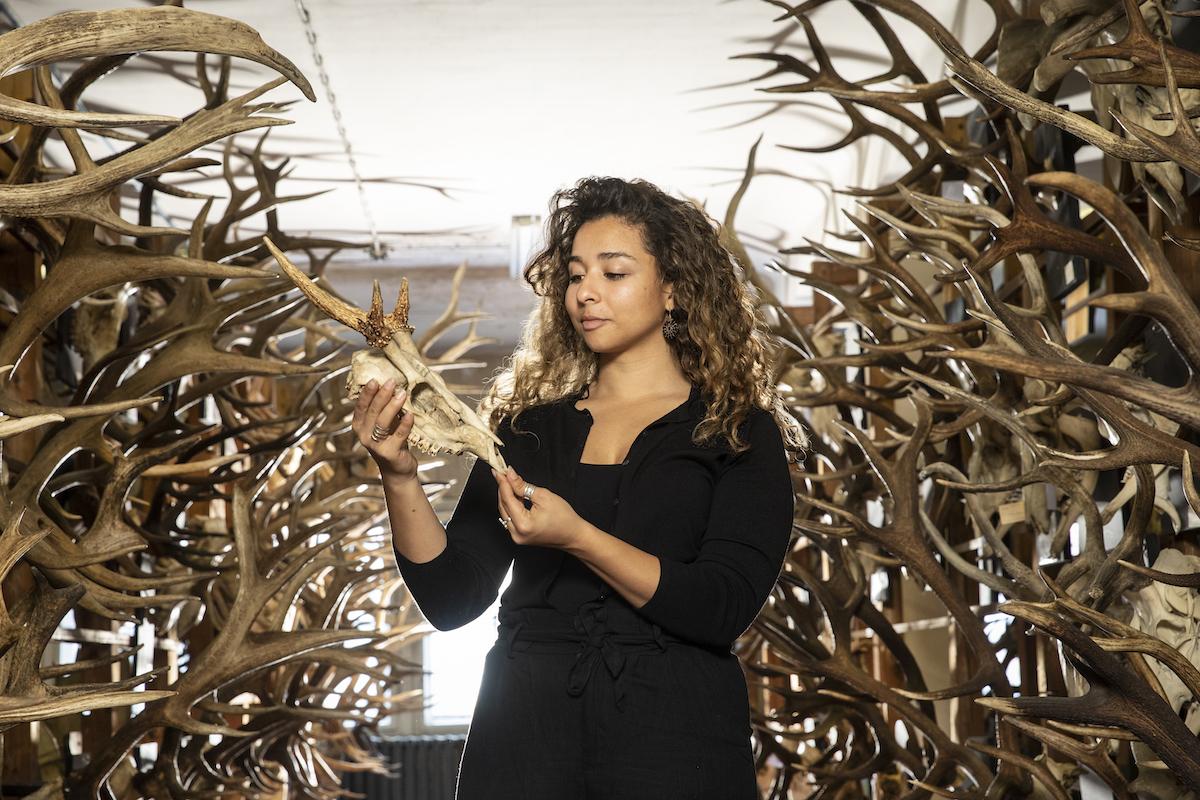 This article was first published in our journal For Nature (issue 2/2020).

She uses light and X-rays to penetrate bones that are millions of years old in order to search for diseases: How Yara Haridy, PhD student at the Museum für Naturkunde Berlin, advances knowledge of evolution.

Something was wrong with those bones, Yara Haridy was sure. The caudal vertebrae of the lizard-like animal that lived in the Permian Age 289 million years ago were fused together in an unusual way, too narrow and even for a healed injury. Haridy felt over the seam. Had a disease caused the two vertebrae to fuse? And could this possibly be detected inside the bone? She decided to pursue her curiosity – and found clues about the oldest viruses in the world.

Yara Haridy is a paleontologist and evolutionary biologist. You could also call her a time traveler. At the Museum für Naturkunde Berlin, the 26-year-old traces the origins and preliminary stages of the human skeleton for her doctoral thesis. Using light and X-rays, it penetrates the fossilized bones of extinct animals and searches for clues to healing processes and diseases that took place in them millions of years ago. This special field is called paleopathology: research into prehistoric diseases. "It's unbelievable how many details we can still read out after such a long time, such as how blood vessels have changed, for example how long a broken rib took to heal or whether an animal was infected with an infection 200 million years ago," she says. "In well-preserved fossils, you can even see the shape of individual bone cells."

The search for the most exciting bones takes them far back on the ramified paths of evolution, to the jawless fish that lived in the Cambrian 480 million years ago. They were our earliest ancestors who already had bones. "I want to be able to explain to people: Your arm bone heals how it heals, because these fish developed in a certain way millions of years ago," she says. "Knowing our ancestors better can help us understand what our genes are doing today." 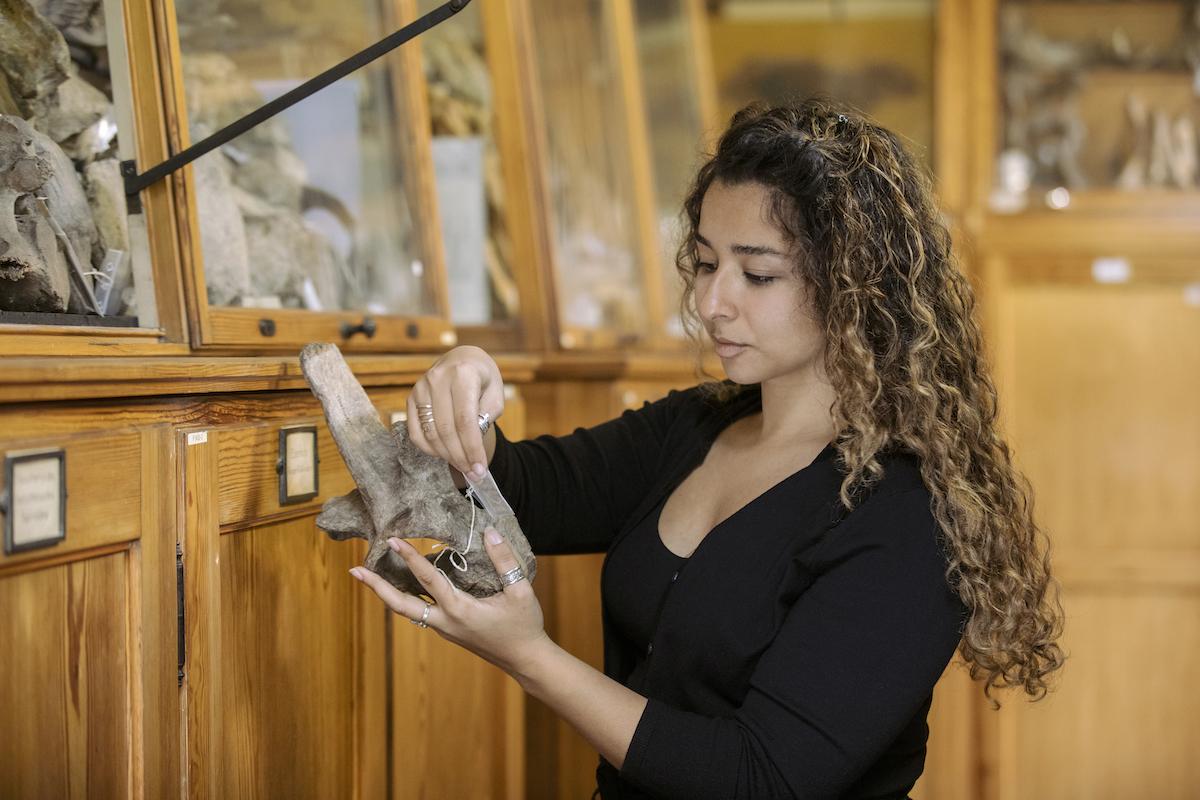 The discovery of the past

Anyone who hears Yara Haridy talk about jawless fish, overgrown bones and other secrets of evolution, feels a lot of the enthusiasm that drives her. "I always wanted to understand how things work in nature," she says. As a young girl in Morocco, she went out into nature, discovered that the ground was full of life, collected skulls, bird bones, beetles and snails – and took them home to explore. "None of my friends were allowed to do that, but my mother allowed me to." Soon after, she moved to Toronto with her family. The twelve-year-old Yara was fascinated by the lush nature of the Canadian east, the green forests in which deer jumped around. She continued her expeditions, but soon afterwards her curiosity dried up. "In high school, I was just worried about my future," she recalls. She decided to study medicine to make the family proud, studied anatomy, genetics, physiology, completed her undergraduate studies and began an internship in a laboratory devoted to the anatomy of prehistoric vertebrates.

"That was an absolute eye opener for me," says Haridy. Even while studying anatomy, she constantly wondered why the human body is made the way it is. "I suddenly realized that fossils can help answer such questions. It opened up a whole new dimension to me: that of our own past." She learned that human teeth developed from fish scales – and could hardly believe it. But soon she even saw the preforms of human limbs grow out of fish fins. From then on, paleontology never let go of her. For her master's thesis, she traveled far back, to the reptiles of the Permian Age, to understand how teeth developed.

Her next big trip took her from Toronto to Berlin, to the Museum für Naturkunde – and to the jawless fish of the Cambrian that are preserved here. The venerable museum immediately cast a spell over her. She roamed through old corridors, collection and library rooms, saw the skeleton of the Archeopteryx lithographica, the perfectly preserved coelacanth and, of course, Tristan Otto, the Tyrannosaurus rex, in which she was particularly interested in his broken ribs and changes in his huge jaw, probably from an infection originated. Even today, after two years at the museum, she regularly undertakes these tours of discovery. "It feels like the building is breathing, so many species were described here for the first time and you can feel the passion of the scientists of the past – that inspires."

But above all, the museum's current research made her move to Berlin. Her research group compares fossils with modern animals in order to be able to tell a more comprehensive evolutionary story, a connection that is rare in the world. Haridy plans to expand her PhD thesis on fish fossils to include current sharks and salmon in the future. "They form their bones very differently from us, without cells," she says. "If we understand their system better, we can also draw conclusions about our own bones." In her free time, Yara Haridy loves to be surrounded by living nature, for example in the botanical garden, which she visits again and again, but also in her apartment in Tempelhof. "I collect tropical plants, my apartment looks like a jungle," she says. Also a couple of frogs croak in their terrarium. 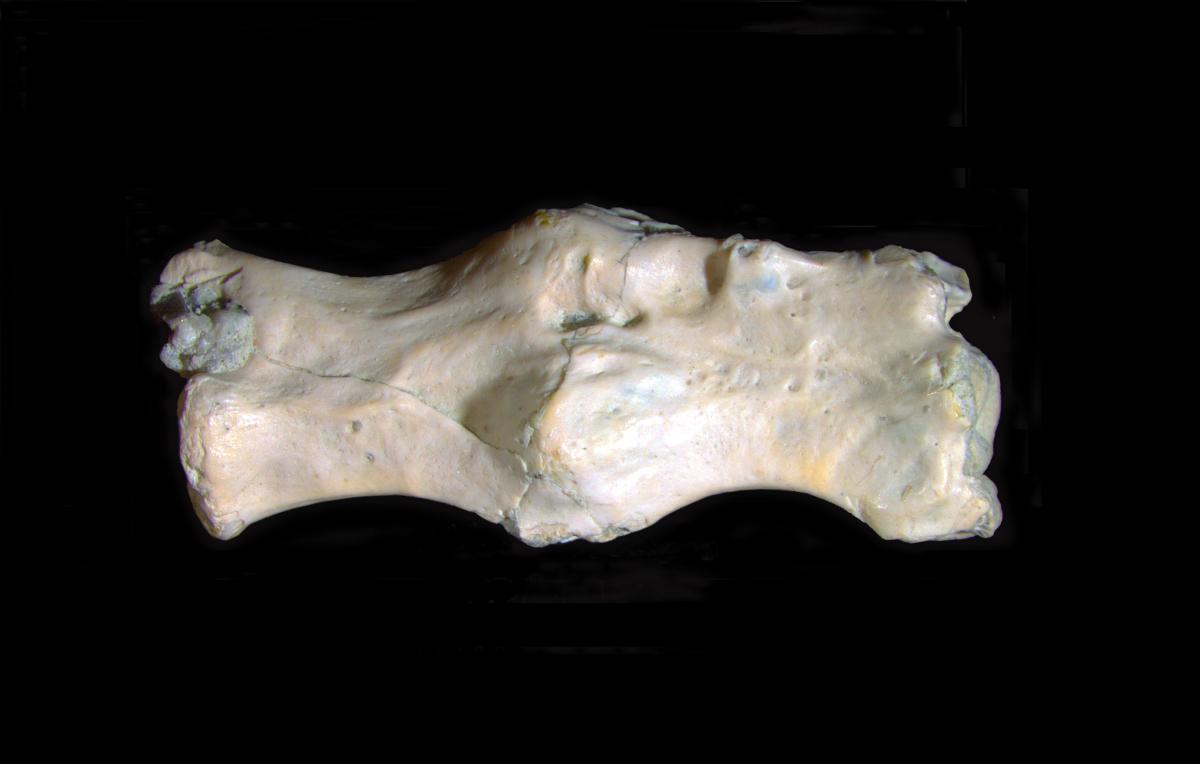 A sense of strange bones

On her flight from Toronto to Berlin, Haridy also brought the conspicuously overgrown vertebrae of the lizard-like animal that she discovered during her studies in Canada. At the Museum für Naturkunde in Berlin, she placed the six-centimeter-large bones in a micro-computer tomograph. The X-rays revealed that the inside of the bone had been strangely destroyed. "It had grown excessively in some places and pathologically degraded in others," says Haridy. With the help of a radiologist from the Charité in Berlin, she compared the symptoms with modern clinical pictures – and found what she was looking for. "Everything indicated that the animal was suffering from a bone metabolic disorder that was similar to Paget's disease in modern humans," says Haridy. In Paget's disease, the communication between cells that build up and break down bones is disturbed. In addition to genetic factors and environmental influences, this is probably due to a virus. Haridy had provided the earliest evidence of Paget's disease – and at the same time found evidence of the oldest virus in the history of the earth.

In Berlin, another strange bone aroused Yara Haridy's curiosity: a thigh bone of the oldest known turtle, which lived in the Triassic period 240 million years ago. "It had a noticeable bump; I was so excited when I first saw it that my doctoral supervisor gave it to me for examinations," says Haridy. Again she had a good sense. A micro-CT scan revealed symptoms that turned out to be malignant bone cancer – the second oldest found in fossils to date. For Haridy, there is also a consoling message in these finds. Paleopathology shows that viruses, cancer and other diseases have always developed in parallel with life and have made us what we are today. "Mankind and their ancestors have survived many terrible diseases in the course of evolution – that should give us hope."